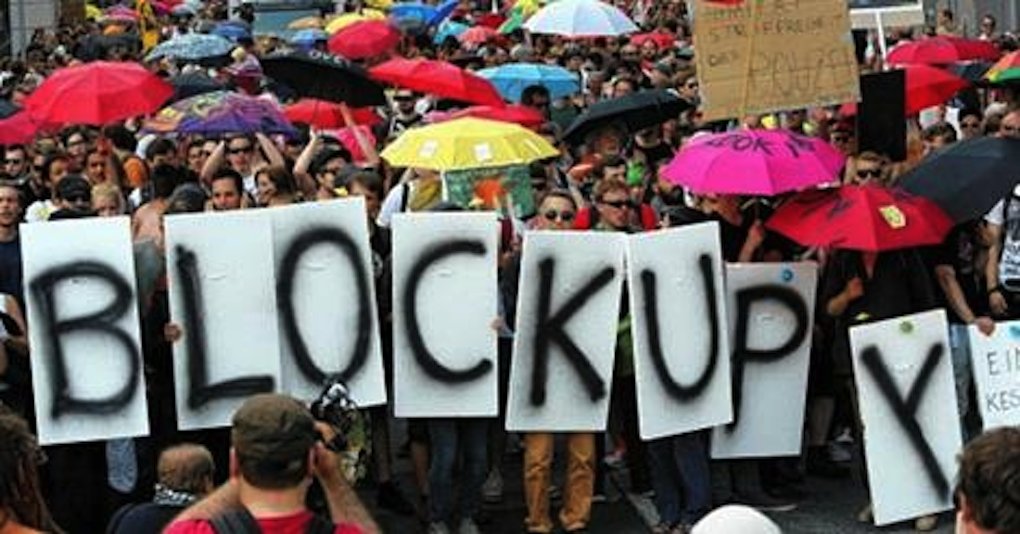 Review: Europe on the brink;
Debt crisis and dissent in the European periphery
Bettina Müller (translation from the German original by the Author)

Austerity measures, Troika, PIIGS… Daily the newspapers tell us about the European crisis which has gone on for almost seven years now; one which should have been fixed a long time ago. It seems gratuitous to note that the current crisis management, spearheaded by the European Central Bank, the EU Commission and the International Monetary Fund (collectively called the Troika) has not yielded the desired results. In fact, it has made the situation worse. While European Union institutions remain undemocratic; while the interests and well-being of European citizens is considered less important than the interests of private enterprise and the banks; and until financial markets are effectively regulated: this will not change. These are the conclusions reached by eight economic and sociologists, including Nobel Laureate Joseph Stiglitz, brought together by economist Tony Phillips in his book: Europe on the brink, debt crisis and dissent in the European periphery, published by Zed Books of London (2014).

Phillips himself begins by examining the root causes of the European crisis in the first chapter of the book, explaining in detail the complex financial interconnectivity and deregulation which led to the crash of the financial markets in 2008, with the knock-on effects in the European sovereign debt crisis. A considerable part of the book is dedicated to Southern Europe; the region which has suffered most from the crisis.

Using Portugal and Greece as examples, local experts show how misinformed crisis management has left these countries in a dire predicament. They paint a completely different picture of the crisis, its causes, origins and consequences, than that which is commonly transmitted in the media.

Mariana Mortágua, an economist and a member of parliament for the left wing block in the Portuguese national parliament, lays out Portugal’s problems dispelling the myths of low productivity, inflated wages, high social welfare standards, and inefficient and bloated government bureaucracies. Mortágua instead points to real causes, such as the economic framework of the European Union itself (especially the Eurozone) which favours the strong economies, such as highly industrialized Germany and France, at the expense of countries such as Portugal, who find themselves relegated to their traditional role of providers of primary resources and the producers of products with low value-add. Not only does this lead to a negative trade balance, it also results in a steady build-up of debt required to finance imports. Nevertheless, the Portuguese debt to GDP ratio did not even reach 70% until 2006 (then below the European average). It was only with the nationalization of private debt as a consequence of the banking crisis in 2008 and 2009 that the Portuguese debt skyrocketed. A similar account in the Greek case-study is introduced in the fourth chapter by the economist Christina Laskaridis.

As one proceeds through the national case studies and global analysis in Europe on the brink, one thing becomes increasingly obvious: the management of the crisis is a result of an undemocratic, antisocial, and economically disastrous process designed to socialize financial failures onto the backs of the population of PIIGS nations by the illegitimate technocrats of the Troika. Moreover this has been done to impede the spread of the crisis to the private banking interests of the European core countries and knock-on effects in the US.

Neoliberal structural adjustment programmes as well as austerity measures have been implemented, despite the fact that they have already caused massive harm and destruction in many other countries of the world. This is one of the arguments put forward by Roberto Lavagna, former minister of economy of Argentina, in his fifth chapter of the book, which illustrates his own nation’s experience, applying his experience to the European Union. The book puts forward alternative policies and different approaches to deal with public debt and the economic crisis as shown by Lavagna and by Phillips in the final conclusion.

The broad expertise of the writers and the facts-oriented myth-busting style makes Europe on the Brink accessible to non-economists. The book draws a terrifying picture of a European Union in which democracy, the rule of law and the wellbeing of the European people have been brushed aside; while authoritarianism, corruption and social decadence increasingly forms part of everyday life in the EU. An eye-opening book, one which should be compulsory reading for all those who still defend the mechanisms currently in place to resolve the European crisis, and for those who have yet to question neoliberal dogma; a dogma that assures us there are no alternatives! Europe on the brink clearly shows that there are!