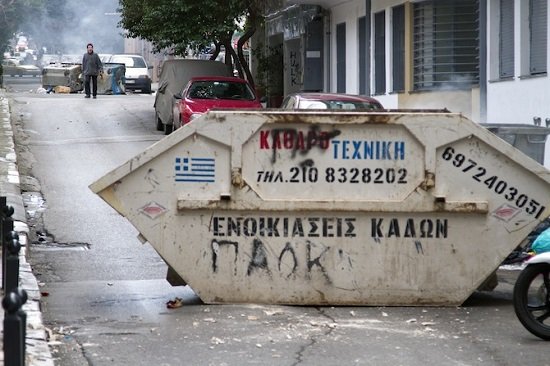 The current European sovereign debt crisis has the capacity of jeopardizing the whole European Union project with devastating social consequences. Tony Phillips’ new book Europe on the Brink investigates the root causes of the crisis, critiques its mismanagement spearheaded by the European Central Bank, the EU Commission and the International Monetary Fund (collectively called the Troika), and suggests alternatives. Bringing together eight leading critical economists and sociologists, including Nobel Laureate Joseph Stiglitz, Europe on the Brink portrays a European Union that is increasingly authoritarian and non-democratic, where the rule of law and the well-being of the people are brushed aside in the interests of balancing the books and imposing a neoliberal agenda.

Ramor Ryan talks to author Tony Phillips, a researcher in the University of Buenos Aires, who specializes in alternative development, sovereign debt issues and ecological economics.

Ramor Ryan: Can you tell me a little about the book and why you put it together?

Tony Phillips: Since 2000 I have been fascinated by the relationship between sovereign debt and international power. From Venezuelan gunboat diplomacy in 1902 to financial collapse in Argentina in 2002, South America (where I spend most of my time) is a test case for this center-periphery power relationship; a relationship that is measured in sovereign debt. Redefining this relationship could redefine ‘development’ right now; it might even save the planet while we’re at it.

In 2011 I was called back to Europe to participate in an Irish book called “What if Ireland Defaults?” to bring a South American perspective to the Irish financial collapse. In 2013 I decided to take this to another level on a pan-European scale; hence this book.

As to the authors, I made a point of seeking out local experts, like Christina Laskaridis, a debt activist in Athens; Mariana Mortagua, an anti-capitalist member of Parliament in Lisbon; and Roberto Lavagna, former Minister of Economics: the man who took on the IMF in Argentina. The new Spanish edition also has Podemos economist Vicente Navarro.

RR: You describe Europe as having a “bi-polar system”.

TP: There are two financial poles in Europe now. There are the central countries like German and the UK, who export goods and services, especially financial services, to the other pole (the periphery). They feed the other pole, the periphery. The press likes to refer to the periphery as the PIIGS (Portugal, Italy, Ireland, Greece and Spain), referring to our slovenly financial standards. It is part of the propaganda that paints a nasty picture of the credit unworthy — we are the pigs.

RR: The book distills the European debt crisis through close case studies of Portugal, Ireland, and Greece, countries that have suffered the most from the austerity policies implemented by the Troika. How does the perspective from the peripheries differ from that of the central powers?

TP: At the core of this difference is the lender-borrower relationship. The lenders are the private banks in the center, much of this debt was private debt, this debt has now been ‘socialized’ onto the populations of Europe by the European Commission using their Taxpayer assured private funds. The European Commission went way beyond their mandate creating various funds like the EFSF (European Financial Stability Facility) and the ‘permanent’ fund called the ESM (European Stability Mechanism).

A lender just wants to be paid back with interest; a borrower wants to have access to more credit, so both have an incentive to keep the European debt crisis from causing a default. However, the periphery sees certain unpayable loans as illegitimate, while the center sees a loan as a loan, no matter whether that loan funded a bribe for an official or a private real estate credit boom; the center says it must be paid back by taxpayers. There is such a thing as illegitimate debt; President Bush tried to use this when he invaded Iraq and inherited the debt of Iraq (he was hushed up rather quickly). These were the two viewpoints faced by Greek and German interests in the negotiations in Athens in the summer of 2015. It is a question of creditor responsibility. If you lend to a credit-unworthy country at a high interest rate should you always be paid back? If so, why make the interest so high? High interest rates imply risk – you can’t have it both ways!

RR: The European Union’s attempt to reduce regional disparities in income and wealth between the Centre and the Periphery through social funds has not succeeded. How did it get to this point of crisis?

TP: The early European Funds – called the EU Structural Funds – were designed to bring the periphery’s economies, particularly their infrastructure — airports/seaports/motorways etc. — into line with France, Germany and Holland. These first funds were donations; the periphery did not have to pay them back. In the drug trade the first hit is always free. From that moment on, exports from the center of Europe, in the new common market, created euro surpluses in the center and structural deficits (funded by debt) in the periphery. Countries in debt have little choice about their internal economic policies. We saw that in Greece in 2015. Germany wants blood, Greece is anemic; something’s gotta give! Pardon the mixed metaphor but you can’t get blood from a stone.

RR: The Greek people have just re-elected the anti-austerity party Syriza (The Coalition of the Radical Left) into power. Last July, Syriza’s leader Alexis Tsipras negotiated and signed an agreement with the Troika for an emergency third bailout of 86 billion euros, despite the Greek public rejecting the harsh austerity conditions of the bailout in a referendum. The then Minister for Finance Yanis Varoufakis says Syriza has now been set up to fail: “Week in week out, the Troika will be demanding more recessionary, antisocial policies: pension cuts, lower child benefits, more foreclosures.” What options remain for Syriza?

TP: Whether the Syriza government is really anti-austerity (or simply pro-Euro) is difficult to ascertain; after all, they did sign the agreement with the Eurogroup. Syriza managed to hoodwink Schaüble (the German finance minister), they avoided an exit from the Euro, but to do this they agreed to do the impossible: to pay an unpayable debt while privatizing Greek patrimony. The privatization contracts are already being signed. Greek infrastructure, its seaports and airports, its energy infrastructure; it is all under the auctioneer’s hammer. German corporation Fraport AG paid 1.2 billion euros to buy up Greek airport concessions, New York investment firm Cerberus paid 1.6 billion euros to the Irish state’s bad bank called NAMA. These deals have brought further accusations of bribes. It is payback time, time to turn unpayable debt into real assets. It is Argentina in the 1990’s all over again.

Where will this lead? It is all profit and loss, corporate profit and human loss. The debt is unpayable; the default is simply delayed. Meanwhile politicians remove social protections (squeezing blood from a stone), pensioners commit suicide; a quarter of a million young Greeks emigrate and Tsipras keeps on smiling.

RR: In the final chapter of Europe on the Brink, Roberto Lavagna — Economy Minister during the Argentine economic crisis, from 2002 to 2005 — describes a “heterodox exit from the crisis” for Argentina. Does Argentina’s sovereign debt restructuring offer guidelines so as to envisage useful policy initiatives for Europe’s heavily indebted nations, like Greece?

TP: It does and it doesn’t. Argentina is hardly a model of financial probity but neither is Greece. What Greece has learned is that the debt-to-GDP ratio is a key determinant of ability to pay; you raise your GDP or you lower your debt. Argentina reduced this ratio by doing both and avoided further default. They grew their economy and kept the overall debt pretty much static. It was painful but much less painful than Troika-mandated austerity in Greece. The only alternative within the current debt-based international financial system is to exit the debt-spiral (think of an airplane spiraling downwards, overloaded by debt). You must restructure the debt and grow the economy.

RR: What do you hope to achieve by producing this book? Why did you title your book Europe on the Brink?

TP: This book is about busting myths; myths that are repeated in the press all the time. I was sick of the lies, politicians giving us more of their “There Is No Alternative.” Of course there are alternatives. A debt economy is a system that is in a permanent state of failure. We need to break out of this — it drives unsustainable growth, it drives increasing inequality, it is driving European unity (which could be a good thing) to the brink of extremist unpopularity. This crisis could push this whole capitalist system over the brink, not just in Europe. Time to shift gears. We need a paradigm shift. It is time to end this blinkered austerity for good!

Tony Phillips’ blog can be found here (projectallende.org) and details on his book can be found here (europeonthebrink.com)
* The book, currently available in English and Portuguese, will be re-published in a second edition in Spanish next month with a new chapter on Spain and an analysis of the Athens Summer of 2015.